The rise of non-debt convertible securities

The private investment and venture community has adapted and changed securities over the years to meet the changing needs of deal-making. Securities in their current form represent decades of innovation and iteration in capital allocation decisions.

What is a convertible note?

Convertible notes allow investors to put money into a company quickly and then figure out ownership later if and when the note converts into equity. The debt and interest of the note generally convert into equity with some sort of discount to account for the risk the investor took putting money in before the priced round.

Because convertible notes are often faster and more straightforward than equity investments, they can be deployed in a number of situations, including:

What is a non-debt convertible security (SAFE, KISS, etc.)?

In December 2013, Y Combinator announced a new type of convertible security: the Simple Agreement for Future Equity (SAFE). This new security aimed to make it easier for founders and early stage companies to raise capital. The group simplified the agreement to a single page (this is the “simple” in its name) and made it downloadable on its site.

Convertible notes agreements can be hundreds of pages long, and most equity rounds run even longer. The goal of SAFEs is to drop the debt covenants and interest payments seen in convertible notes, as the debt burden of notes often feels like a drag on founders right out of the gate. Instead, SAFEs allow investors to give companies money and convert that principle into equity later at a discount, while removing interest accrual and the overhead of debt.

Non-debt convertibles quickly grew popular among pre-funding and early stage companies, especially as other groups launched their own securities, like 500 Startups’ Keep It Simple Security (KISS). However, it wasn’t yet clear if they could become mainstream outside of this audience. Only time would tell.

Carta is uniquely positioned to understand the marketplace for convertible securities

At Carta, we build software to help both companies and investors manage their ownership, giving us unparalleled insights into the fundraising environment. Companies can issue both debt and non-debt convertible securities on the platform. This lets us see whether these securities are catching on and, if so, among which segments.

I worked with Ray Raff of our data science team to dig into this evolving convertibles marketplace. Ray looked at the convertible securities that have been issued on the Carta platform and categorized whether they were debt (like traditional convertible notes) or non-debt (like SAFE and KISS instruments). Additionally, he looked at the principal amounts of each type of security and the types of companies that employed each. Below are our findings.

2020 is the first year non-debt convertibles were as prevalent amongst pre-equity financing companies as their debt counterparts measured by both dollars invested and the number of securities issued. This is impressive considering they’ve been around for less than a decade. 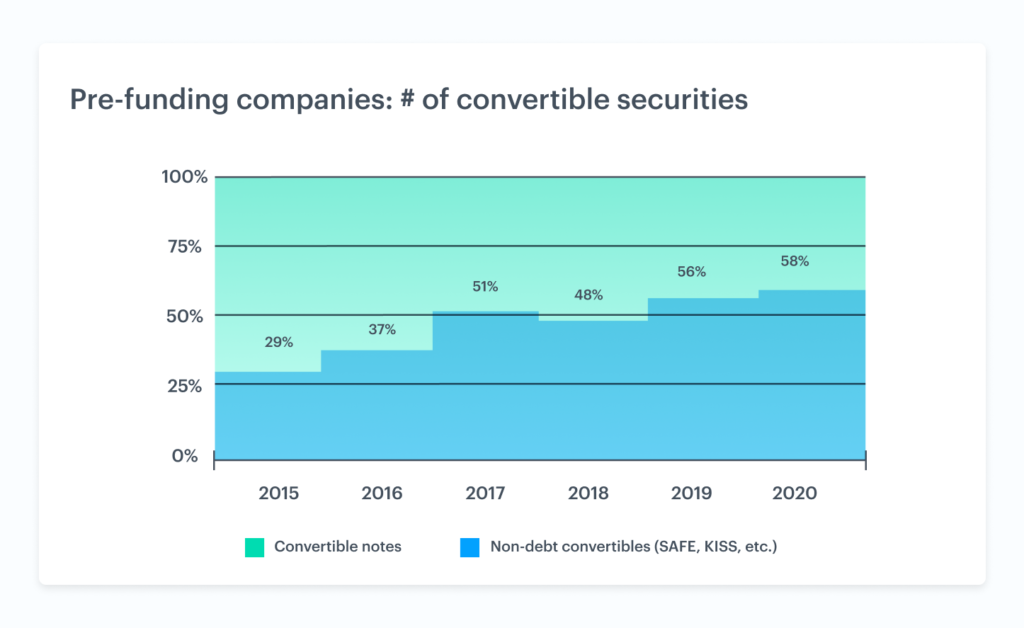 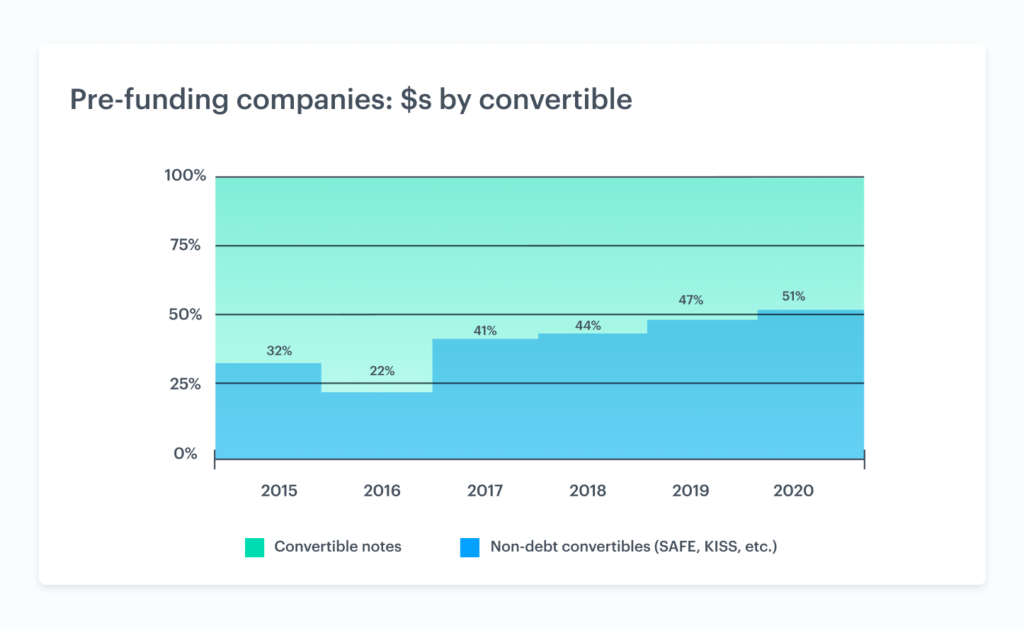 Early stage companies are more likely to use non-debt convertibles 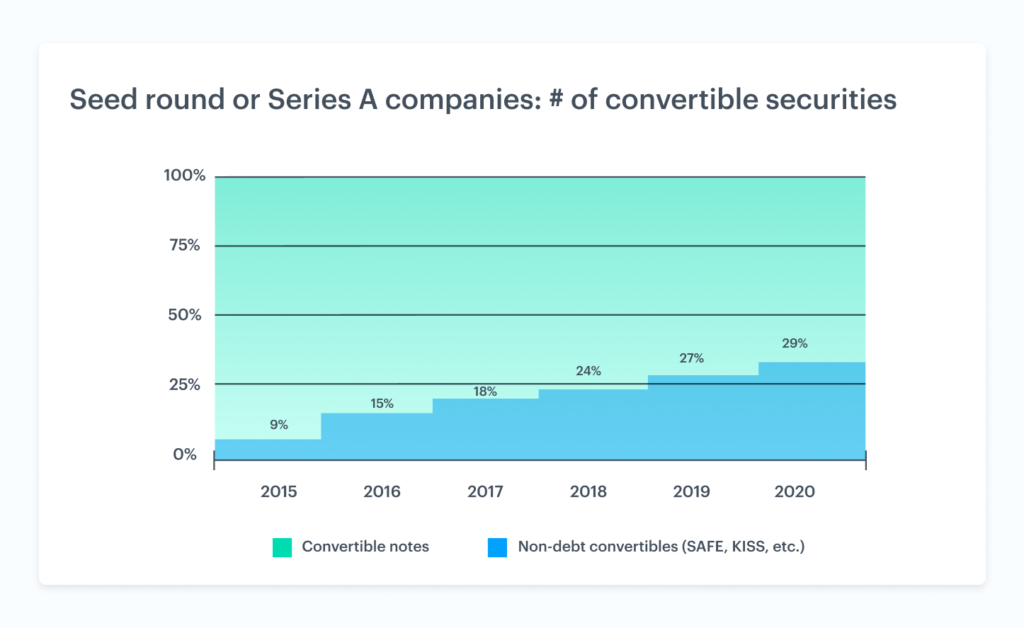 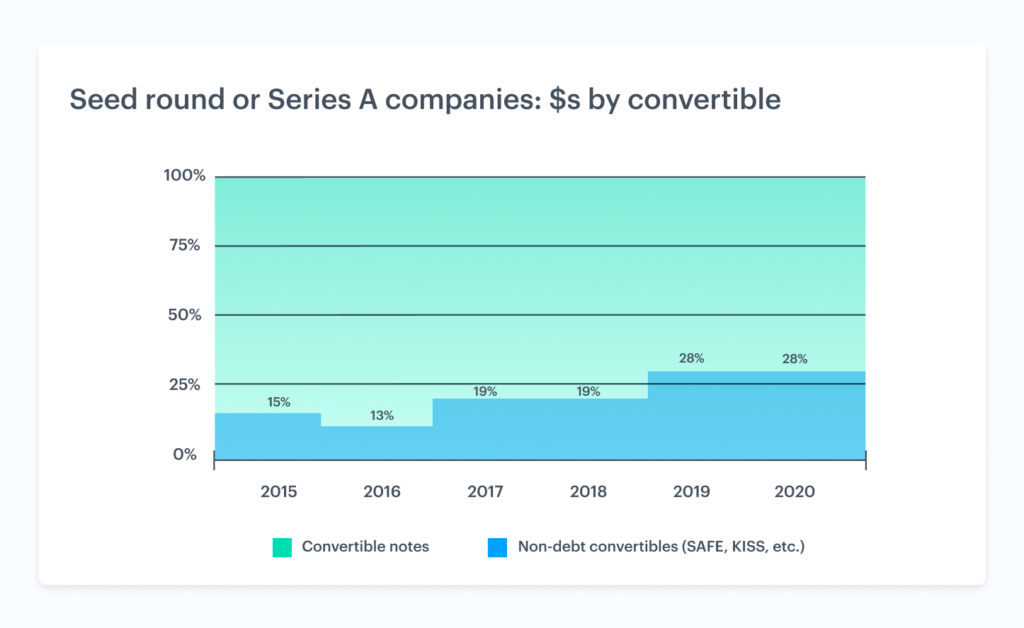 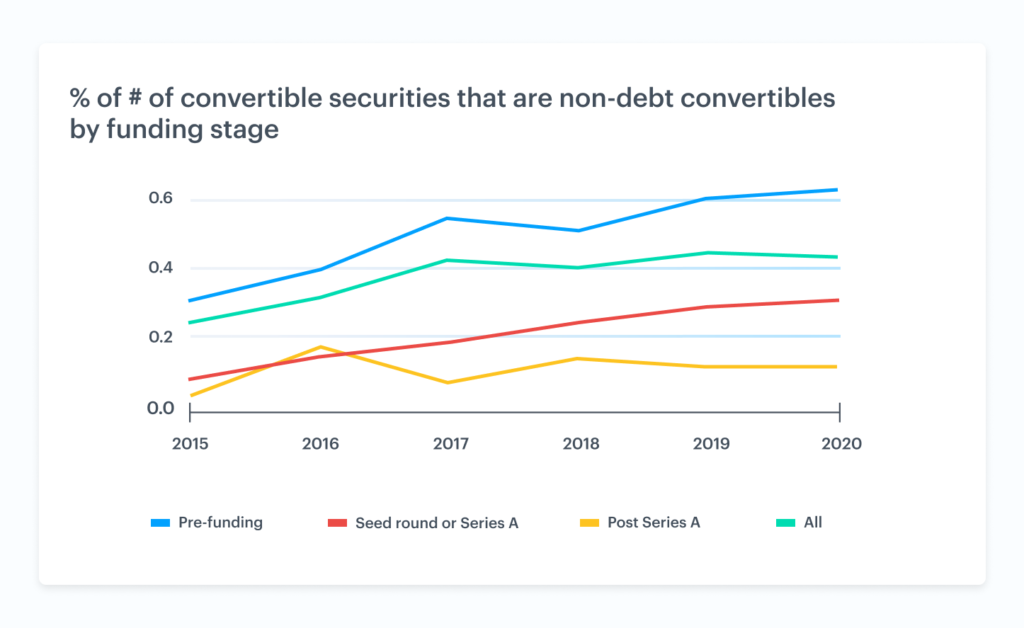 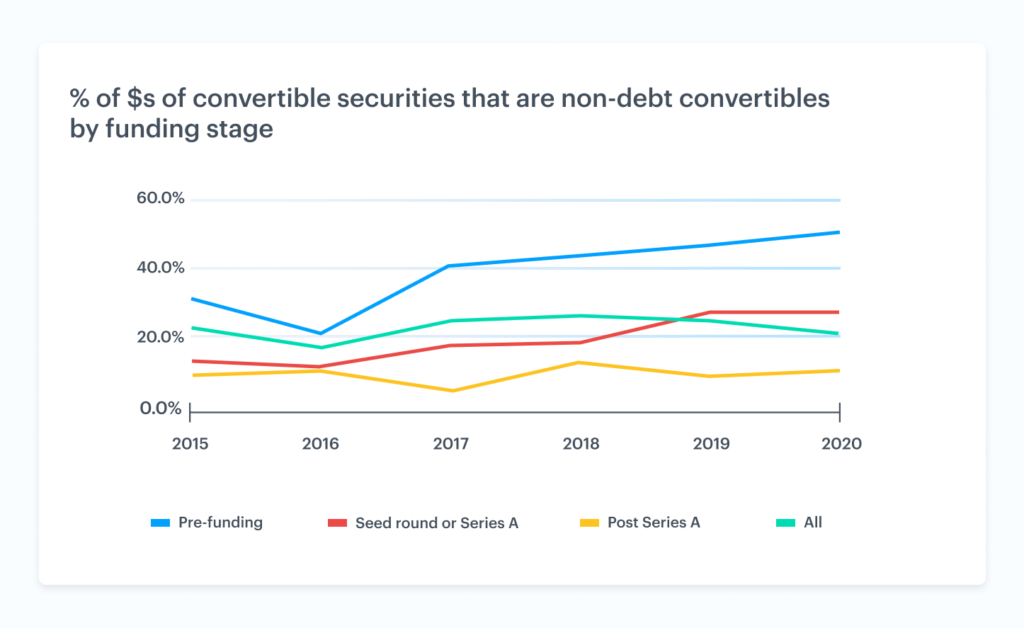 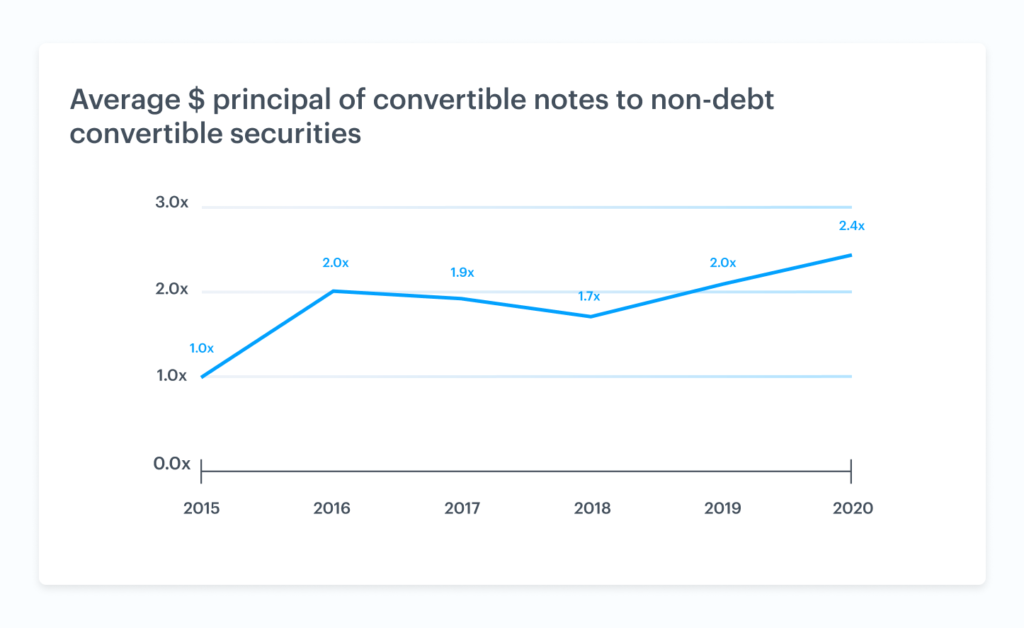 At Carta, we aim to support companies through all phases of their growth. While we’ve supported issuing both convertible notes and non-debt convertibles like SAFEs and KISSs for years, we’ve also heard from our early-stage customers that they want more tools to help them understand these instruments. That’s why we recently launched a free SAFE and convertible note calculator to help companies. As the market we support changes, we want to make sure we always have the best tools available for founders.

1Companies who have contractually requested that we not use their data in anonymized and aggregated studies are not included in this analysis.

DISCLOSURE: This publication contains general information only and eShares, Inc. dba Carta, Inc. (“Carta”) is not, by means of this publication, rendering accounting, business, financial, investment, legal, tax, or other professional advice or services.  This publication is not a substitute for such professional advice or services nor should it be used as a basis for any decision or action that may affect your business or interests.  Before making any decision or taking any action that may affect your business or interests, you should consult a qualified professional advisor.  This communication is not intended as a recommendation, offer or solicitation for the purchase or sale of any security. Carta does not assume any liability for reliance on the information provided herein. 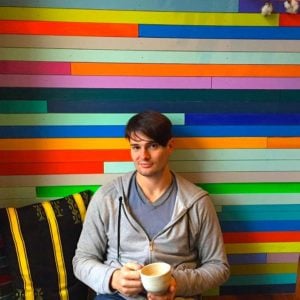 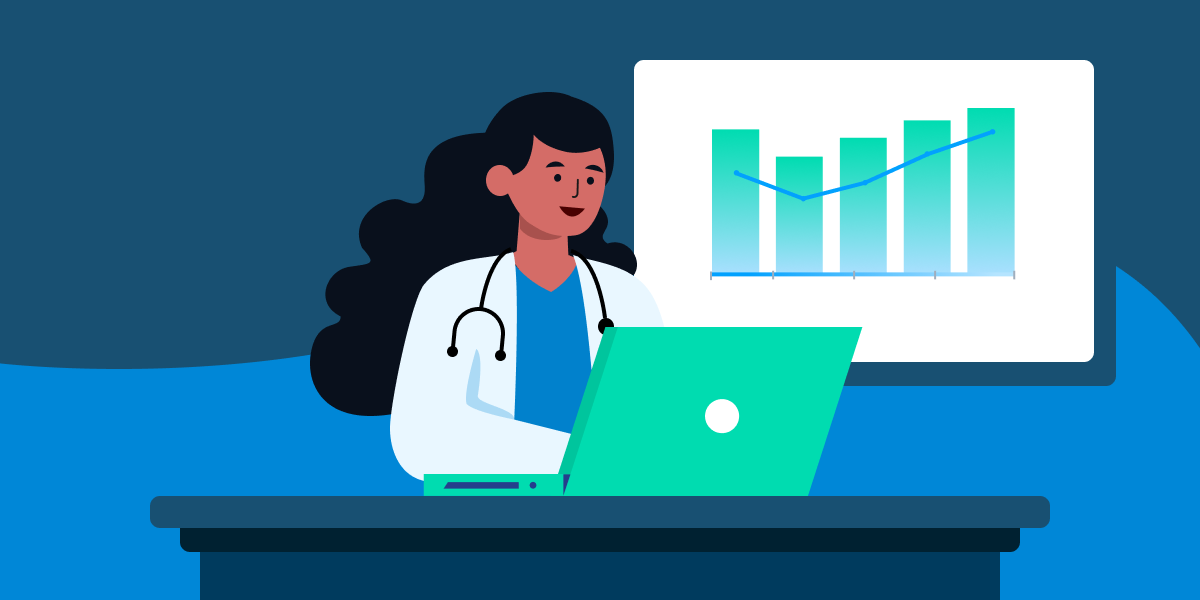 What healthcare and life sciences founders need to know about 409As 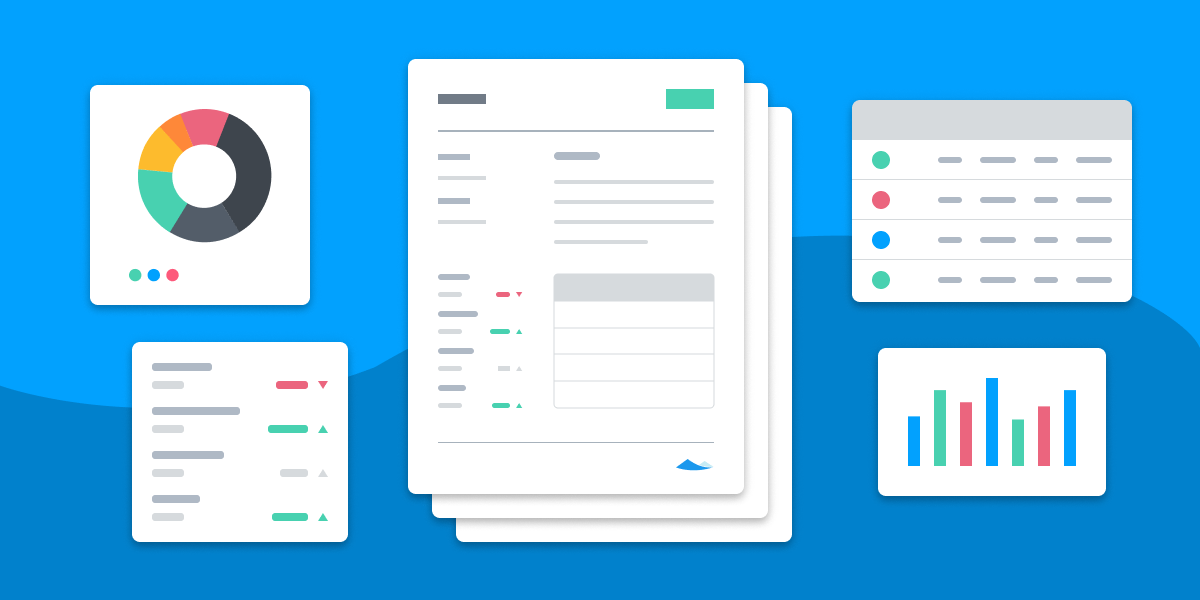 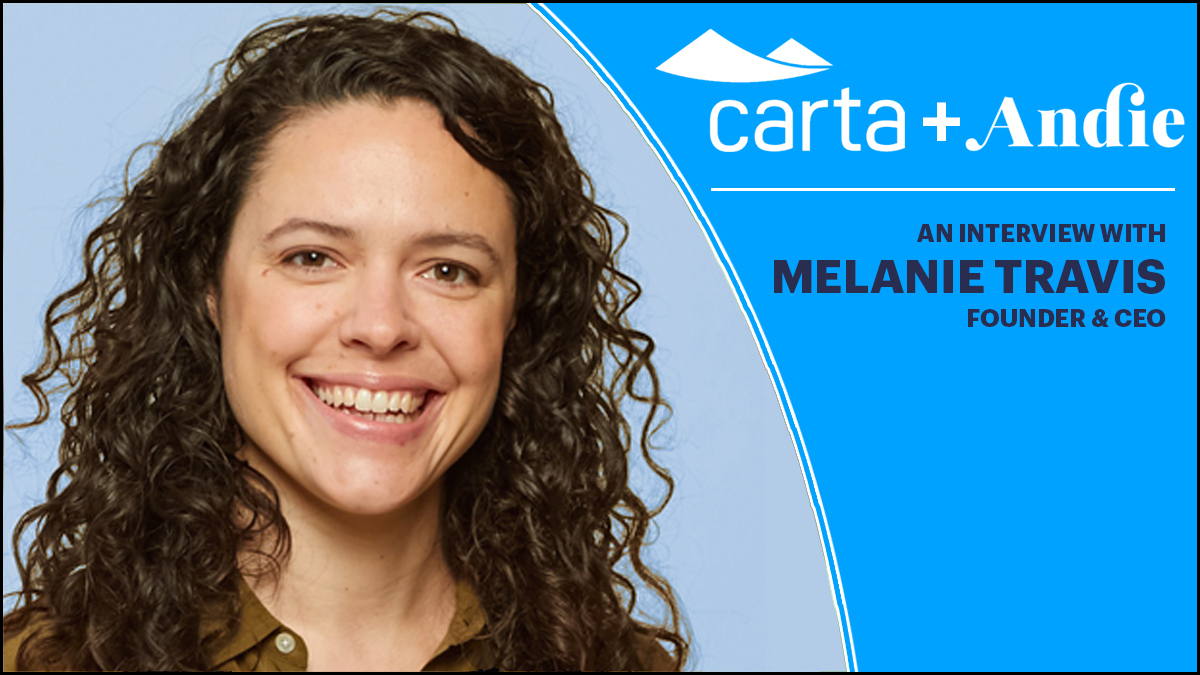